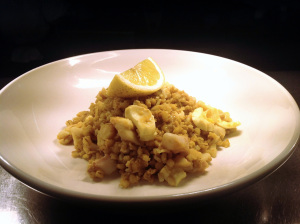 A Hindi dish of rice or lentils combined with meat or fish is known as khichri. As happened frequently at the time, the Victorian British in India came up with their own version of the dish and originally served it at breakfast so that, in the days before refrigerators, early morning-caught fish could be eaten while still fresh. Nowadays usually made with smoked fish, Kedgeree is rarely eaten at breakfast in homes anymore but I sometimes see it on hotel breakfast menus and was served a pleasing plate of it recently on the early morning train. If you don’t wish for it at breakfast, it makes a great supper dish, starter or light lunch.

Instead of smoked salmon, kippers make a delicious kedgeree as do mussels, using their cooking liquor to flavour the rice.