There’s a particular Guardian columnist worth reading occasionally. Intelligent and articulate whilst often pretentious and sometimes misguided, George Monbiot is keen on making contentious comment in order to keep his political and environmental views in the public eye.

Well, just recently, his column caught my eye and, after wading through some fairly flowery prose, it was delightful to see that he then went on to describe how he’d recently cooked and eaten a squirrel. He somewhat tried to justify things by pointing out that, having just been hit by a car, the squirrel was dead when he found it. He did actually suggest that many might think he was raving but then went on to detail how the eating of this squirrel was fundamental to his beliefs; whether roadkill or shot. And I couldn’t help but largely agree with him.

Amongst lots of other stuff, much about the environment, part of his theme was that we’ve become removed from where our food comes from, particularly our meat, and he uses both the fact that this was roadkill and a squirrel to shock us into thinking about food production.

In simple terms, there’s little that we eat that clearly reminds us of the fluffy or cute or big-eyed creature it used to be before it was vac-packed or processed or put on our plate. Sure, we might often see fish served whole but they’re hardly as funny as a feathered chicken or as entertaining as a field full of pigs. Most people ignore the fact that, unless they were prepared to pay a considerably higher price than the norm, the life of the creature that gave them their bacon was probably an unimaginable hell that should be beneath the morals of creatures that oversaw this life; these creatures being the most intelligent and able on this planet. After all, it’s we humans who decide that the animals, from which we obtain the majority of our meat, even exist, never mind how they’re treated while growing or how they’re transported to the slaughterhouse, or how they’re cared for once they get there.

Until the impact from a car, or that from the pellet from a gun, a squirrel leads a pretty good and natural life (assuming other predators don’t get to it first) and its last few moments can be mercifully quick. If we’re going to eat meat, things such as squirrel, or dare I say wild rabbit, are a much more morally defendable resource than intensively-reared pigs or chickens or insensitively-transported and slaughtered cows and sheep.

Surely, as we comprise the market that demands the supply of cheap animal-based protein, and while we sit in the position of God as to how the animals are bred, reared and despatched, we have no right to be offended when we are reminded as to what meat comprises and where it comes from. It’s time we stopped being squeamish when confronted with meat that reminds us of its donor, a cuddly toy or cherished pet.

Monbiot alluded to this and yet despite the well-considered justification he wrote in his article, the vitriol it  provoked on social media was highly entertaining. As was the comment made on the Guardian’s website by someone hiding behind an anonymous made-up name: “Next thing you know you’ll have sunk to the level of those disgusting fox-hunting Tories”.

I can’t write and express myself anywhere near as well as Mr Monbiot. Nor do I share all of his views; particularly some of those on the environment. But it’s stupid to be polarised and assume that just because you don’t agree with someone’s overall stance, they don’t have some valid views. It’s like died-in-the-wool labour supporters slagging off all Tory views or vica versa.

It’s always worth listening to people who analyse and think. And in this case, it’s worth clicking on George Monbiot squirrel and reading his article.

And it’s why, despite having published the recipe for squirrel casserole before, I make no apologies for repeating it here today.

Personally, I wouldn’t recommend eating roadkill unless you really knew what you were doing. Also, the chances of getting a squirrel that’s not totally flattened are remote. So, unless you are pretty nifty with an air rifle, ask a good butcher/game dealer; most of whom should be able to get you squirrel. It will be gutted and skinned and ready for the pot. And in this recipe, is left whole for cooking before incorporating into the rest of the ingredients.

And if a squirrel really is too “weird” for you, the recipe works equally well with a bunny. 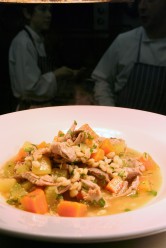 Place the squirrel in a roasting dish, cover with water, add a little salt and pepper, cover with foil and place in the oven for two hours. Remove from the oven, allow to cool a little and then lift the squirrel onto a plate so that you can pick the meat off the bones. Be careful not to include any small rib bones in the reserved meat.

Pass the resulting stock through a fine sieve into a saucepan, add the onion, potato, carrots, celery, thyme and barley, bring to the boil and simmer for 20 minutes. Add the squirrel meat and simmer for a further five minutes. If there’s too much liquid, pour most of it off into another pan and reduce it at a fast boil before returning. Then taste and season if necessary.

As previously published in The Northern Echo as Bill’s Bites

← A hidden gem of a restaurant at the Fringe