A hidden gem of a restaurant at the Fringe 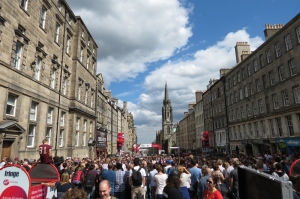 I spent a week at the Edinburgh Festival Fringe just recently. I’ve been a few times now, and if you’ve never been, you’re missing a wonderful yet daunting experience.

Nowhere in the world is there collected so much talent in one small space. In less than a month there are more than 3,000 shows with more than 50,000 performances in more than 300 venues. Anybody can perform at the Fringe providing they have something to perform, can rent somewhere to perform, and have the organisational and financial wherewithal to promote their performance. As a result there are tens of thousands of performers from all over the world. And hundreds of the shows are free, with their performers asking you to pay as much or as little as you wish. Funnily enough, even if you see something rubbish, you still feel you want to pay something.

I primarily go for the comedy but then get bowled over by theatre and dance and music and cabaret that I never expected to see. No wonder hundreds of thousands of visitors flock to Scotland’s capital each August, spending a fortune on accommodation and in restaurants and bars. There are some mutterings that the festival is becoming too big and overpowering but, in general, the Fringe’s shortcomings are outweighed by the benefits; both commercially and culturally.

So you can imagine that the thought of all those culture-hungry visitors needing feeding will promote an envy in me. More than three weeks of saturated footfall is a restaurateur’s dream. We experience it in Durham for a few days every two years when the fabulous Lumière comes to town and, of course, get a boost with such things as the exhibiting of the Lindisfarne gospels. But three solid weeks . . . .

So why was it so difficult to find half decent food? It’s not as if Edinburgh doesn’t have its share of good restaurants. But, in order to overcome the daunting nature of such a large festival, I’d spent so much time planning my twelve hour days culture-hunting, that I’d totally forgotten to book any restaurants. As a result most of the best places weren’t available when I wanted. So we ended up eating rubbish: badly-cooked chips, poorly-seasoned fast food and tempting yet dissatisfying burgers.

That is, until we came upon a restaurant that had only been open a couple of weeks and, as yet, hadn’t had time to build a reputation, good or otherwise. As a result, we spent a quiet lunchtime during which we had one of the best, yet simple, meals we’ve had in a long time.

With a rare couple of hours to kill, we just stumbled upon this absolute gem. If you’re interested – and if you’re going to Edinburgh and planning on eating out, you should be – it’s on Jeffrey Street, just off the Royal Mile and oh-so-close to all the action.

On a similar premise that any half-decent restaurant has at least a half-decent house wine, as the place was called Michael’s Steak and Seafood Bar, that’s exactly what we ordered. Between the two of us we had a magnificent crayfish cocktail, half a dozen oysters, some fabulous fish cakes and (and I don’t say this lightly) what was probably the best rib-eye steak I’ve ever tasted. Thirty two days dry-aged Orkney beef I was told when I enquired. I can only think that, because the restaurant was so new (hardly a website and I can’t find them on Twitter or Facebook), the manager was still getting into his stride because he seemed rather perplexed at our delight over the food, if not the effusiveness of the staff.
If I were writing an official review, I’d give the food six out of five. It might be worth trying soon because there must be a danger that, if you go to the Festival next August, it’ll have gone the way of so many other places that just churn out food for fuel. Or perhaps, and I have some faith here, it’ll remain true to its principles and become as difficult to get into as so many of the other good restaurants in Edinburgh. And become an added attraction to the the biggest arts festival in the world.

Previously published in The Northern Echo as Bill’s Bites