Mussels with cider and thyme 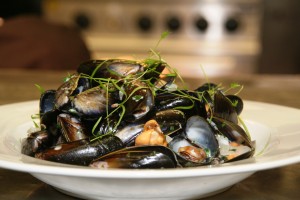 We don’t eat enough shellfish which is a shame because, like a lot fish, it’s cheap and very fast to prepare and cook. Mussels are traditionally in season in the colder months – those with an ‘r’ in them, and this March is no exception – and make an ideal quick and tasty starter or main course.

When you buy mussels they’re alive. It’s important that you don’t cook any that were dead before cooking as eating those can make you ill. However, there are two ways that check they’re ok. First, when you get them home, clean them thoroughly under running water and pull off any beard-like attachments. Any that are open, squeeze closed slightly once or twice. If they don’t move and close themselves then they’re dead so discard. And after cooking the mussels, any that haven’t opened should be discarded too as they may have been dead. Don’t worry, there won’t have been more than a handful.

Place a large pan, that has a lid, on the heat. Melt the butter and gently sauté the chopped shallots and garlic without browning. When softened, add the cider and turn up the heat. When boiling, add the mussels and sprig of thyme and cover with a lid. Boil over a high heat for about four minutes, shaking the pan vigorously every minute or so.

Remove from the heat and spoon the mussels into large warmed bowls. Return the pan to a high heat and bring back to the boil, adding the cream and reducing slightly. Check whether the liquor needs seasoning with a little black pepper – it’s unlikely to need salt – and spoon over the mussels.

← Mind your own business
Let’s be commonsensicle →