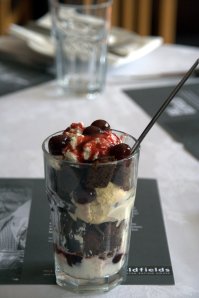 We’re just introducing the following dessert onto our menu. The recipe makes enough for four people but you could always double up the chocolate brownie part of the recipe if you wanted to make just some brownies on their own.

It’s really something that you can change to suit what you can get your hands on. We’re using some lovely cherries that have been soaked in kirsch but there’s nothing to stop you using fresh stoned cherries, glacé cherries or even some fresh or frozen raspberries. Also, we use a little raspberry coulis that we make ourselves but you could use a pre-prepared sauce or coulis. It’s very much up to you.

First make the brownies. Pre-heat the oven to 160°C, gas mark 3. Melt the chocolate by putting it in a heatproof bowl and then placing it on top of a small pan of simmering water. While it’s melting, cream the butter and sugar by vigorously beating them together with a wooden spoon in a large bowl. As the mixture begins to turn light coloured, add the egg and beat that in too before using a metal spoon to fold in the melted chocolate and ground almonds.

Spoon the mixture into suitable moulds such as ramekins. It doesn’t really matter what shape they are as you’re going to tear the brownies up after baking. Place the moulds in the oven and bake for 25 mins. Remove and allow to cool.

To assemble the dish, break up the brownies and then spoon layers of brownie, ice cream and cream into tumblers like we do or you could use a wine glass, cocktail glass or even, dare I say, a dessert dish and dribble some coulis over the top of each.

Previously published in the Northern Echo

← Are vegetarians in danger?
Butterbean scotch egg with tomato jam →