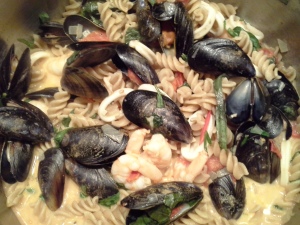 Sometimes I need a dish that’s just simple and fresh; certainly easy to cook after a day at work. Fish always falls into that category and while we know that fresh is best, fish freezes remarkably well. I’ve always got some in the freezer.

The other day, needing a quick meal, I knew I’d got some squid rings and uncooked large prawns languishing in plastic bags in the freezer. I called at the fishmonger in Durham market for a couple of handfuls of mussels and made the following dish in as long as it takes to cook the pasta.

The ingredients include creme fraiche but it could be double cream with a little more lemon juice added. There’re fresh herbs but they could, at a pinch, be dried; particularly as long as you’ve only recently bought them. And, as you can see in the picture, I’ve used wholewheat fusilli pasta but, hey, it could be standard spaghetti or whatever you fancy.

As for the fish, that’s entirely up to you. Be careful to not overcook anything you use or it’ll either just break up or, as the squid, prawns and mussels I’ve used here, become tough.

Just remember, if you’re using fresh mussels, clean them before use and pull off their beards. And discard any that are broken or where there shells don’t close within a few seconds of them being tapped. Then, discard any that don’t open after cooking.

Bring a large pan of salted water to the boil and cook the pasta as per the packet instructions.

Meanwhile, heat the olive oil in a large pan or frying pan, add the chopped shallot or onion and saute until soft, adding the crushed garlic after a minute or so.. Stir in the tomatoes, chilli flakes and white wine, bringing to the boil. Add the mussels and then, after a couple of minutes, the squid and prawns. Turn everything over a few times until the prawns have turned pink.

Stir in the creme fraiche, lemon juice, fresh herbs, season with salt and pepper and then add the drained pasta to the sauce, gently turning so everything is coated – adding a little boiling water or cooking water from the pasta if you think it’s necessary. Spoon into warmed serving bowls.

Lovely accompanied by a green salad.

← Get the portion size right
We should be ashamed →