Don’t be fooled by processed food

It’s like a war out there. Who would you trust? After all, it’s down to you. You’re the one who’s going to determine whether you survive and ultimately succeed. It’s apparent, just by the fact that you’re reading this newspaper, that you’ve got what it takes; that you’re intelligent enough. So, who do you believe? Who’s lying to you?

Well, unfortunately, nearly everybody. Or, if not actually lying, misleading you with a type of sleight of hand that makes you do something that, if you really thought about it, you might not.

You think I’m being alarmist? Well, do you really trust politicians to tell you the truth? The non-being-economic kind of truth? Surely not. Just consider their motives. Did they stand for parliament for purely altruistic reasons; just to represent the well-being of you and all your friends? Or was there just a teensy weensy bit of motive to get and stay in a position of power and influence? Obviously they’re bound to fashion whatever they communicate so that it conveys the impression that having them there is in your interest and that you should vote for them when it’s time for them to get back in. They’ll work their argument hard in such a way that you’ll be persuaded. Is that the truth, the whole truth and nothing but the truth? Or, dare I suggest, a little selective?

Take the young chap trying to woo the young lady. Will he really love her in the morning and, anyway, doesn’t love last forever? Or is he spinning her a little bit of a yarn in his desperation to consummate his said wooing?

And then there’s commerce. Do you really think that anybody trying to sell you something is going to provide you with all the facts in a very clear manner? Would the cigarette companies have drawn attention to the life-shortening effects of their products if they hadn’t been forced by legislation? But even if laws are introduced in order to force the truth out, there’s a continuous game where we, the consumers, are caught piggy-in-the-middle between the legislators and the corporates egged on by their shareholders, trying to confuse us with their sales arguments. I mean, have you ever tried to compare mobile phone or energy tariff structures? They’re actually designed to make your decision difficult so that you end up choosing their product for non-financial reasons such as the phone’s pretty colour.

There’s always some pressure to hold back the whole truth in the expectation that its release will make you stop, think and refrain from buying. 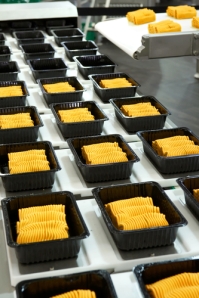 And so it is with the corporate manufacturers of processed food. In recent times, we’ve discovered the surprising (not) fact that certain products sold as “light” in fact contain more calories than the “normal” variety. I’ve long argued that products such as a “virtually fat free” fruit yoghurt are not the greatest catalyst to a sylph-like you for a number of reasons but not least, that without fat to act as a flavour carrier, they’re particularly unsatisfying and the desire for fulfilment remains once you’ve eaten them. So you’re encouraged to spoon more of its sugar-laden content into your mouth,

We shouldn’t complain about it because that’s life. We live in a commercial world so have to get used to it and, dare I say, wise up.

But beware because these misdirections can be very blatant. We’ve now also been alerted to the fact that some so-called “light” crisps are more fattening than full-fat, that some “healthy” biscuits are at least as calorie-filled as normal ones and good-for-your-gut mini drinks may not be that good for your body in “light” form. And the list goes on.

Ooh, those nasty companies trying to hoodwink us. Who’d have believed it? And what can we do about it?

Short of revolution, the only way to know what you’re eating is not to buy processed foods you can’t fully trust, or at least to limit them to those times when they’re really essential or your craving outweighs your self control. At all other times it’s simple: cook your own food from scratch. You have got the time. And if you think you haven’t, you’ve never learnt how to make food in the time available. If you’d been taught correctly you could knock up many meals in a few minutes. Shopping and cooking can take no more time than going to the takeaway. But if we’re not taught we can’t do it. So we rely on processed foods produced by those nasty companies that don’t tell us the whole truth. And believe me, that is the whole truth.