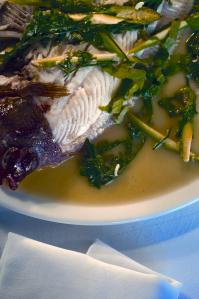 One of the most evocative of smells is that of the sea and I don’t think anyone’s managed to bottle it yet. But samphire’s a herb or vegetable with an aroma that when fresh, instantly teleports you to the seaside.

Sometimes referred to as sea asparagus but more accurately called glasswort, samphire is found on coastlines and is mainly harvested, in the UK, from the mud flats of East Anglia between the months of June to September. It can be used as a simple starter – just blanch for a minute and dress with olive oil and lemon – or as here, as a natural complement to lemon soul.

Obviously, it’s not always that easy to get hold of but now’s the time to see if you can buy it. We get it from our delicatessen suppliers – so it is in the region – and it can occasionally be seen in supermarkets and wet fish shops. Don’t be tempted to use pickled samphire in this dish as it would overwhelm the delicate flavour of the soul. An alternative is to use some lightly steamed spinach or chard or, of course, asparagus. But it’s worth noting that samphire’s quite salty so there’s no added salt in the recipe. You might need a little if using the alternatives.

Make the herb butter at least an hour or so in advance by softening the butter, mixing in the chopped herbs, wrapping in cling film and chilling.

Pre-heat a large oven-proof frying pan. Dust the fish with a little flour, add a little olive oil to the pan and seal both sides of the fish for around twenty seconds.

Add the shallot, lemon juice and white wine to the pan and place in the oven for ten minutes.

When cooked, remove the fish from the pan and keep warm. Heat the juices in the pan and drop in the butter cut into cubes, constantly shaking the pan until all the butter has melted and the sauce is shiny. Drop in the samphire to warm through, remove and place onto warmed serving plates with the fish on top and the sauce poured over and around.

In the restaurant we serve this dish with mashed potato and it would also go well with a wild leaf and herb salad.