Currently on our menu at Oldfields, these rather delightful blue cheese tarts make a fabulous starter, light lunch or supper dish. 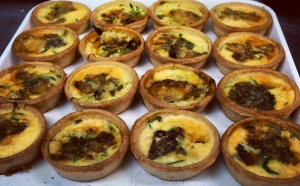 In this recipe I’ve described it as four individual tarts but if you wanted to make one tart and divide it, use the pastry to line an eight or nine inch diameter flan dish.

First make the pastry by placing the egg and butter into a food processor and blitzing until smooth. Add the flour and a pinch of salt and black pepper. Then, with the motor running, pour in the water until the mixture comes together in a ball. Remove from the processor, wrap it in cling film and allow it to rest for 30 minutes in the fridge.

Then roll the pastry out until it’s about the thickness of a pound coin. Line four 10cm (4 inch) tartlet rings with it and cut discs of greaseproof paper to fit inside each one. Scatter a few dried beans over each disk of paper or use a handful of pasta, just to weigh the pastry down, and bake in the oven for 5 to 10 minutes or until the pastry is cooked. Remove the greaseproof paper and allow to cool.

To make the filling, first melt a knob of butter in a saucepan and stir in the sliced leeks. Allow to cook over a low heat for five to ten minutes until the leeks are soft and tender. In a bowl, beat the eggs with the cream and then stir in the cheese and warm leeks along with a little pepper. Depending on how salty your cheese is, further salt may not be necessary. It’s up to you but be careful not to over salt.

Spoon the mixture into the tartlet cases and bake in the oven until set – between 15 and 20 minutes.

← Are you feeling a little horse?
Squirrel a little away →