Squid and potato casserole with garlic and parsley 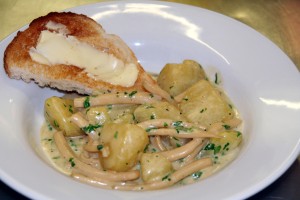 Some people may think squid is an unusual food and many people have had poor experiences with rubbery squid dishes; especially in the chain-style restaurants found frequently on retail parks. However, this recipe gets rid of the misconception that squid is tough and, along with it being tasty and not in the least bit weird to eat, it’s very inexpensive. The dish is just as good with frozen as with fresh squid and, if you wished, the squid could be replaced by its relative, the cuttlefish. It’s really worth giving it a go.

If buying fresh squid, have the fishmonger remove the quill that serves as a type of backbone.

Using a knife to cut one side, open the squid out flat and cut it into 1cm-wide strips. Heat a tablespoon of olive oil in a large saucepan and sweat the squid strips in it until opaque – around five minutes.

Peel and crush the garlic cloves, add to the squid and sweat for a further two minutes or so. Add the wine and water, bring to the boil, cover and simmer over a very low heat for an hour when the squid should be nice and tender.

Peel and dice the potatoes, add to the squid and continue to simmer until the potatoes are just about cooked. Add the cream and again bring back to a simmer while also adding salt and pepper as required.

Stir in the parsley and spoon the casserole into warmed bowls, serving with crusty bread and possibly a green salad.

Previously published in the Northern Echo

← Do Americans understand us?
The cost of being vegetarian →