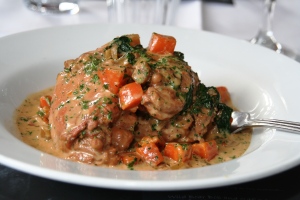 I’ve called this Wild Rabbit in Cider because I like the idea of using rabbits that have run free and lived a natural life prior to coming to the pot. However, being wild, the taste and texture of the meat can vary considerably from one rabbit to the next so it’s worth being prepared for that if you try to repeat the dish. Farmed rabbit will produce more consistent results – but at what cost to the rabbit?

Rabbit is an inexpensive and vastly underrated meat which can be found in all good butchers shops. However, you may not find it in your average supermarket. Unless you’re confident, get the butcher to joint the rabbit for you which he’ll do in seconds.

Place a heavy, deep-sided pan on the heat. Dust the rabbit pieces in flour and shake off any excess. Pour a couple of tablespoons of oil into the pan and add the rabbit, turning it to colour on all sides.

Then add the butter, pour in the cider, bring to the boil and simmer for a minute or two. Add the thyme and bay leaf, cover the pan with a lid or tin foil and put in the oven for around two hours or until the rabbit is cooked and tender. Check on it once or twice and if the cider appears to have reduced two much during cooking, simply top up with a little water.

When cooked, remove the rabbit from the pan and pass the remaining stock through a sieve. Cut the celery and carrot into cubes and roughly chop the garlic. Add them to the stock along with the double cream, bring to the boil, turn the heat down and gently reduce until a sauce has formed that coats the back of a spoon and the vegetables are tender.

To serve, place the rabbit meat back into the sauce to reheat, season with salt and pepper and finish with the chopped parsley. Super served with mashed potatoes.

← Your call’s unimportant to us
Lamb with swede gratin →